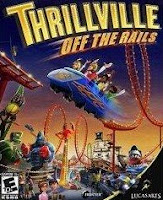 It’s no secret that we all tend to procrastinate to take our minds off writing for a few hours. Usually when I delayed my writing to give my brain a rest, I read my favorite writing blogs, took a shower or went for walk, but these past few days I procrastinated way too long as I entertained myself with a new video game that the kids received for Christmas. Yes, I’ll admit it, I’ve spent several hours on my kids’ Play Station 2

(another Christmas gift) playing Thrillville: Off The Rails

. I made the mistake of watching the kids play the video game after opening their gifts Christmas morning, and I thought it was interesting. Then, before I knew it, I joined in the fun and became addicted to the game. I should have left it alone. I knew better, but I just couldn’t resist, and now the kids laugh at me.

“Mom’s addicted to the Playstation,” they say.
“It looks like you’ll have to take turns with your mom now,” my husband told them.

It’s been years since I’ve sat down and played video games, so it’s actually been fun and refreshing. Problem is I have to pull myself away in order to get back to my writing. This isn’t as hard to do when all the kids are here, though, because when everyone wants to play, we each get an hour. Once my hour’s up, I go back to writing. What happens when the kids aren’t here or don’t want to play? Well, let’s just say I need some strong super glue to keep me in front of my work and away from the video game.

The good news: once I return to my laptop, I’m ready to write again. Who knows, I may become addicted to more of their video games and end up writing about video games, too. Of course, then I’d be paid for my time spent procrastinating.